Known as the "Gem of the Crystal Coast," Emerald Isle has quickly become one of the most popular family destination and vacation spots on the East Coast. With its immaculate beaches, festivals and endless activities, 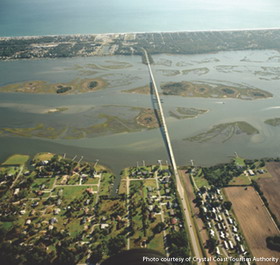 it's easy to see why people in increasing numbers are discovering this island jewel.

Located on the western half of the Bogue Banks of the Southern Outer Banks, Emerald Isle was purchased in 1951 by seven local developers who wanted to build a family-oriented resort community. When flying above their newly acquired property, they looked at the island below and thought it resembled a green gem floating in a sea of sparkling blue water. Immediately they named it Emerald Isle.

Profiled in USA Today, The Wall Street Journal and The Washington Post as one of the East Coast's premier family vacation attractions, Emerald Isle officials have worked hard to maintain the island's popularity by enacting ordinances and restrictions designed to provide a peaceful and relaxing atmosphere.

"Emerald Isle has quickly become one of the most popular family destination and vacation spots on the East Coast."

The island hosts seasonal events each year, with the St. Patrick's Day Celebration kicking off the spring season each March. The two-day event features food from area restaurants, arts and crafts vendors, an 8K race and a series of concerts by local bands and musicians on three different stages.

According to a 1960 federal census, only 14 people lived on Emerald Isle, while today more than 3,700 residents call it home. During each summer, the town welcomes tens of thousands of visitors.

Emerald Isle attracts more than just vacationers, however. Investors also have shown great interest in the island, taking advantage of a low tax rate and rapidly rising property values. Emerald Isle has flourished because it has focused its attention on families, as well as on preserving its environment. The island, home to abundant wildlife, has established a program to protect its sea turtles. The Emerald Isle Sea Turtle Protection Program enlists the help of residents and visitors, who volunteer their time to protect and preserve their non-human neighbors on the island.