Rockets that presaged the U.S. government's space program soared high above the sandy shores of Surf City, North Carolina, more than a half century ago. Today, fewer than 2,000 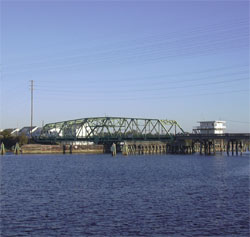 people call the tranquil beach town home throughout the year, many of them retirees, but the population explodes to well over 10 times that when the Atlantic Ocean's gentle summer breezes beckon.

Surf City, with an estimated population of just more than 1,700, is the largest of three towns on 26-mile-long Topsail Island, a permanent home for some people and a pleasant summer retreat for thousands of others.

The town and the island have much to offer for those seeking a laid-back, small-town atmosphere. Located about 25 miles south of Jacksonville and the same distance north of Wilmington, visitors and residents will find beautiful beaches, interesting shops, fine restaurants and recreational activities, including golf, kayaking, bike riding and fishing. The winter and summer weather, as well as the cost of living, are moderate.

Topsail Island, now connected to the mainland by a swing bridge in Surf City and a high-rise bridge at smaller, quieter North Topsail Beach, was accessible only by boat until after World War II. During the war, the U.S. Navy and Johns Hopkins University used the island to launch the nation's space program with Operation Bumblebee. More than 200 experimental rockets were fired into the sky there between 1946 and 1948. As a reminder of the island's recent history, many of the military buildings used by Bumblebee still remain.

Topsail Island's lingering legend long predates the U.S. Navy's interest in the area. The island got its name from the pirates, including the infamous Blackbeard, who hid their ships in the channel behind the island, waiting patiently for their unsuspecting prey to pass. When merchant-ship captains learned of this fiendish hiding place, they watched for the tops of the pirates' sails above the rolling dunes - hence the name Topsail Island.

Even today, treasure hunters search the forests of Topsail Island for Blackbeard's buried treasure. Many others have discovered that Surf City and the island itself, with its pristine beaches, slow and quiet pace and magnificent weather, are treasure enough.