For nearly 300 years, the name Oak Island was a misnomer. Not an island at all, it was connected to the 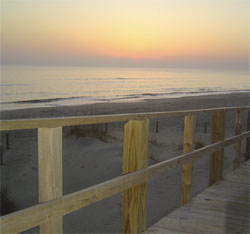 mainland by mud flats that flooded with the rising tide. It was not until 1936, when the Elizabeth River was deepened during the final stages of the construction of the Intracoastal Waterway, that Oak Island truly lived up to its name.

Because Oak Island was so accessible to land, it served well as a military outpost. Fort Caswell, completed in 1838, was fortified with brick walls and earthworks. With more than 61 gun emplacements, it guarded the mouth of the Cape Fear River and provided protection for the port of Wilmington to the north.

The Oak Island Lighthouse and Lifesaving Station was completed in 1958. One of the newest lighthouses in the United States, it is the second most powerful beacon in the world and can be seen for 19 miles, helping ships avoid the treacherous Frying Pan Shoals.

Development of Oak Island began in the late 1930s, when 40 cottages were constructed in Long Beach. Almost overnight, the area became a favorite among local residents. Big band leaders drew thousands to dance at the Long Beach Pavilion.

"The Oak Island Lighthouse and Lifesaving Station has the second most powerful beacon in the world and can be seen for 19 miles, helping ships avoid the treacherous Frying Pan Shoals."

Now a favorite spot for retirees, the city itself was founded in 1999, when the towns of Long Beach and Yaupon Beach were consolidated. Leaders from the neighboring towns saw incorporation as a means to reduce the expenses of the tiny ocean-side communities.

Tourism is the mainstay of the economy and the majority of Oak Island businesses are geared toward the nearly 40,000 visitors who descend on the island each year. The recent addition of national retail and restaurant chains help provide for the needs of residents and visitors alike.

Of all the barrier islands, Oak Island may be the most environmentally friendly. The island is home to a bird sanctuary and a sea turtle sanctuary, and both are popular destinations for Nature lovers. Oak Island is the only North Carolina town that operates a greenhouse for growing sea oats and other native beach vegetation, and the town also maintains The Oak Island Nature Center and Ocean Education Center.

Recreational activities abound on the island. Boating, kayaking, surf fishing and deep-sea fishing are possibilities, but, if you're more of a landlubber, the area is home to seven golf courses. With 14 miles of beach, shell hunting and relaxing by the shore are popular activities.